­
Loading...
ALL REFLECTIONS
How Gender Equity and Reconciliation Can Change the World
Kiersten Marek | June 27, 2018

In the wake of #metoo, we are so grateful for the voice and work of so many partners and friends like Kiersten Marek, Founder of Philanthropy Women, who are tirelessly working for a more just, gender-balanced world. Kiersten has a gift of beautifully spotlighting the work of women in philanthropy and was a participant at a recent gender reconciliation retreat held in Boston.

The original article may be found here. 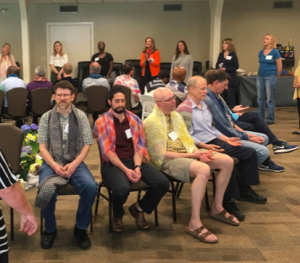 Women encircle men during a closing ceremony at the Gender Equity and Reconciliation Initiative retreat in Framingham, MA.

When I told my husband I was going to a three-day retreat on gender reconciliation, he was genuinely excited for me, but he couldn’t help getting in a sarcastic reference to cliché. “Are you going to hold hands and sing kumbaya?” he asked.

I thought for a moment, and then my eyes lit up. “I think so!” I said.

The Gender Equity and Reconciliation International (GERI) retreat held in Framingham, MA did indeed involve some hand-holding and song-singing. But it also did much more, traveling into a realm of meaningful communication and understanding where I have never been before.

And yes, the singing and holding hands were a part of that. We sang traditional Christian ballads like Amazing Grace and Taize chants like Ubi Caritas, as well as songs and mantras from different parts of the world. My favorite song, and the song that has stuck with me since the retreat (I taught it to my children, and now we chant it every so often) was a South African Khosa song with the refrain, “Igama lama kosi kazi Malibongwe,” which translates roughly as, “Let us Praise the Deeds of Women.”

Cynthia Brix set the tone for the three days early on, helping the community of 48 women and men understand that their full participation in the retreat program would help provide a protected environment for everyone. We agreed to a list of community rules, including the necessary protocols of maintaining confidentiality and taking responsibility for one’s own experience, and also not engaging in any intimate relationships with people we met on the retreat. All of this helped to establish a shared sense of trust, safety, and healthy boundaries for the three days.

It wasn’t all comfortable, this three days of being in a diverse mix of Evangelical Christian leaders and progressive liberals, plus two young adults who grew up in a community-based orphanage in India who are training as GERI facilitators. Some were there from Rwanda and Lebanon, while others came from Florida and New York.

Some issues were talked about openly, and others were discussed more privately. One woman spoke with me privately about how difficult it was working in a Christian church in New England, after spending most of her career working in media in the southern United States. The mostly male clergy of the church she worked for didn’t seem to hold her in the same high regard as some of their other male colleagues, she said. It was an experience she was accustomed to in other professional settings, but had hoped would be different when working for the church.

For some, I imagine it was much more difficult engaging with people who were colleagues at the retreat. Afterward they would be returning to the hierarchies of their workplaces, so everything they said here at the retreat had to be measured against that. And yet it didn’t feel like people were shutting down or not going into the deeper places in their sharing of experiences. But some were certainly proceeding with more caution than others.

William Keepin and Cynthia Brix have been facilitating gender equity and reconciliation programs for 26 years, and both come to the work with rich and complex professional histories that bring both science and religion into the mix. Earlier in his career, Keepin was heavily involved in scientific research on global warming and sustainable energy, and his research influenced environmental policies in many countries. Keepin discussed his earlier life in science and gave a presentation on how science and spirituality are related, with pictures of fractals and mini-fractals inside of them. “Fractals are the most complex mathematical structures ever discovered, yet they are precisely ordered by the simplest of principles,” writes Keepin in his 2016 book, Belonging to God: Science, Spirituality & a Universal Path of Divine Love.

Similarly, in a phone interview following the retreat, Cynthia Brix spoke with me about how gender equity and reconciliation facilitates a seemingly simple process, and yet the process reveals deep complexities in human relationships, and gives us the opportunity to shift our perspectives on large categories of thought and behavior. Some of the most in-depth research findings on GERI were presented in 2016 by Dr. Samantha van Schalkwyk, who found that students who participated in GERI programs shifted their underlying “gender ideologies” in a positive direction.

Brix comes to the work as Co-founding Director of GERI after being a campus minister at the University of Colorado-Boulder. She completed seminary at Iliff School of Theology, and has trained extensively in meditation, which definitely showed in how she facilitated the retreat. Along with conducting over 120 gender reconciliation workshops in nine countries, she has also led interfaith spirituality retreats for women and has supported projects for women’s empowerment in India.

Deepening the Conversation with the Home Group

My home group, a randomly-chosen group of four people that would meet several times throughout the workshop, consisted of two male clergy from the same church and a female professor of theology from a seminary in New York. When we were invited to share about how our early lives were shaped by gendered messages, one of the clergy talked about how he did not feel athletic enough as a boy and that this was a difficult challenge for him. We all shared stories like this, some in more general terms and others in more substantive or vulnerable terms, with the end result that we created a sense of community that grew and deepened over time.

On the evening of the first night, we did group skits to explore some of the toxic dynamics we’ve all experienced in gender relations. I played a pregnant secretary being harassed by a male boss, and tried to look shocked as he told me I would be fired because I wasn’t good enough. We had designed the skit so that an African-American woman advised me to go to Human Resources, but I wouldn’t listen to her. Then an older white woman would give me the same advice, and then I did listen, which highlighted the intersectionalities between gender and racial oppression. Others took roles in the workplace of encouraging me to “go along to get along,” and just get accustomed to the way the boss talked to me. We could all feel ourselves becoming more comfortable with one another as we engaged in the improv, and the process served to validate that sometimes boundaries of behavior could be played with for fun, especially in the service of understanding and transforming these dysfunctional patterns. 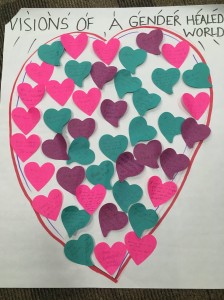 On day two, things got a little heavier, as we separated into male and female identifying subgroups. In her own reflections on the retreat, donor-activist Emily Nielsen Jones talks about the power of encircling our gender pain, and on day two we really delved into that process. These separate women’s and men’s groups afforded another level of gender safety, and we each unravelled a story from our lives that continues to have emotional impact related to gender. One woman spoke of a relationship with a man where he failed to commit to her and how it made her feel both angry and deeply sad. Another talked about her difficulty expressing anger. As a professional in church, she felt there was little room for her to reveal the full range of her emotions and their intensity.

In the afternoon and evening of day two, the process went more deeply into men’s groups and women’s groups witnessing each other, as we told the stories of how gender had impacted us emotionally. At one point one of the male members got into a little trouble, coming into the women’s group and doing something silly, probably trying to lighten the mood, but a woman called attention to the inappropriateness of this. The man took full responsibility for his faux pas, and ended up impressing me with how carefully and thoroughly he apologized, promising to reflect on the situation and his actions, and do better in the future.

The last day was the most celebratory. I don’t want to divulge too much about it, but I’ll just offer a tease by saying it involved both singing and chocolate. Throughout the process, both the men and the women created unique ceremonies to praise each other, and to help each other shed toxic cultural ideas about gender identity.

Brix and Keepin generally like to keep to the three-day length of the gender equity and reconciliation work. “We have a variety of program offerings, with the three-day process as our primary introductory program,” said Brix. “Witnessing the transformation that can happen in community in the short space of three days is awe-inspiring, and is something desperately needed in our troubled world today.”

“We’ve worked in diverse sectors ranging from universities, prisons, NGO’s, and religious organizations to Members of Parliament in South Africa,” said Brix. They have also done more targeted work, helping a group of therapists in Florida specializing in recovery from sexual trauma. “There’s an intimacy that has been lost in our cultures across communities and across the globe, and people are longing for a deeper more meaningful connections.” 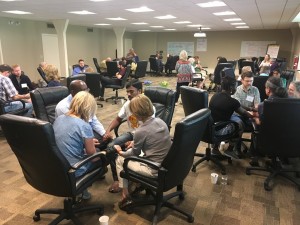 Craig Parker, a member of the clergy who attended the retreat also spoke about its impact. “Rarely have I experienced such vulnerability, rawness, empathy and grace as I did on this retreat. I will treasure the stories I heard from you, and I plan to implement the lessons learned as I engage with students, young professionals, prisoners and fellow ministers.”

Philbert Kalisa, the Founder and CEO of REACH in Rwanda, had this to say: “The sharing from women to men touched my heart deeply and pushed me to repent for not speaking out some of the injustices I see often in our churches and societies connected with our culture that doesn’t consider women as equal as men. I made my decision not to keep quiet anymore. I will advocate for women created in the image of God as our mothers, wives, daughters, sisters and nieces.”

For me, the process of immersion back into the real world was gradual. I felt I carried the energy of being at the retreat with me for well over a week, imparting bits and pieces of it to my family and my clients — using new words, new phrases, practicing different techniques for facilitating new thinking both in my own life and in my therapy work.