­
Loading...
ALL REFLECTIONS
Women Breaking Caste Barriers: Made in The Image of God
Maria Blackburn | May 12, 2017

This is the second post in an ongoing forum on the topic “What Practical Relevance Does the ‘Imago Dei’ Have for the Advance of Human Rights, Peace, and Global Development in the 21st century?” See the first post by Dr. J. Richard Middleton, author of The Liberating Image: The Imago Dei in Genesis 1, exploring what the “image of God” meant in it’s ancient Hebrew context and how it can inspire us today in the 21st. c. to tap into the liberating current within our faith traditions. For this next post in this conversation, we have the honor of hearing from Maria Blackburn, Program Officer with Nomi Network, a women’s economic empowerment/anti-trafficking organization working in India and Cambodia, reflecting on the power of women to come together across ethnic castes to recognize their common humanity and shared dignity as human beings made in the image of God.

Human trafficking is an illicit trade, in which a person will trick, coerce, and force another person into sex work for profit. It seeks to destroy, twist, and shatter the image of God in other humans, taking away freedom and choice. Human trafficking is modern day slavery. Nomi Network was founded in 2009 as a way to combat human trafficking by providing women with the freedom and ability to make choices. The dream was to see every woman reach her full potential, be known and to know her identity as an image-bearer of God.

Getting Started in Bihar, India 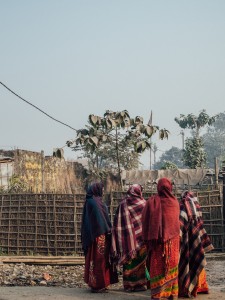 In 2012, we had the incredible opportunity to start a program in Bihar, India with support from the U.S. Department of State. Bihar is one of the most impoverished states in India with over 70% of the 116 million people living in poverty. Here you will find the highest rates of bonded labor, caste discrimination, and social inequality. We intentionally chose the first set of trainees for our program to bring together women from different communities and castes for a common purpose. Although history and tradition held these groups apart, we saw Hindu and Muslim women from different castes, who would never associate with one another come together under Nomi Network. We found a way to bind them together through awareness that they are all made in the image of God. 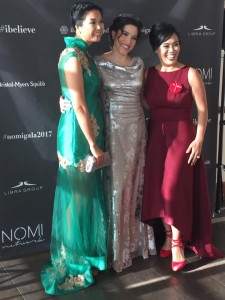 At Nomi Network, we believe every woman we work with is made in the image of God, and our training curriculum and organizational culture are interwoven, so that the women involved learn this themselves. Many women have a hard time seeing each other as equal, but we know they must first see themselves as worthy. We address this by having each woman share an affirmation about the person next to her during the first 10 minutes of class. Slowly, they become more open and speak positively about each other, which leads them to speak well of themselves. There is something powerful about speaking goodness about oneself that manifest into a life-giving reality. 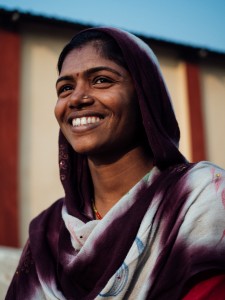 The next part of daily training brings about the real challenge- teamwork. The women are placed into groups of four using random numbers to ensure the trainees are not working with others from their village or community. They start by learning simple stitching, and, each group is given the task to make a small pouch., But to complete the assignment, every team member must pass quality control. We see women step up as leaders and the spirit of teamwork take flight. All the barriers of difference slowly melt away as diverse groups accomplish something new together. Transformation takes the place of stagnant stigmas and comradery replaces dissidence.

Building a Culture of Value and Equality 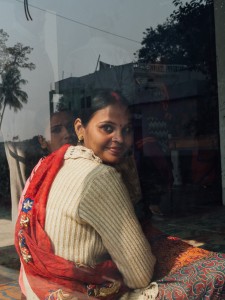 The trailblazer for this program is a woman named Supei, Nomi Network’s VP of Global Initiatives. While trying to understand the culture, Supei realized that change would happen through creating a new culture with new traditions. Her favorite new tradition was hugging each trainee as a greeting, despite physical touch not being common among Indian culture. The women were stunned as Supei hugged everyone and were encouraged to hug each other. It is now a tradition for trainers to hug trainees, bringing all the women to the same level. 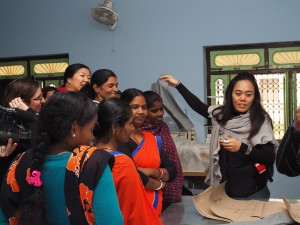 Another catalytic moment occurred when Supei could not find anyone willing to clean the bathroom. She was told to hire a street sweeper, a term common for someone from the untouchable caste left to do dirty work, but she refused. “Why hire someone to clean the bathroom when we can do it ourselves?” was the final word from Supei, as she set out to clean the bathrooms at the office herself. The staff and trainees were amazed to see her do such a lowly task normally done by women from the untouchable caste. Eventually this task was taken on equally by all the women on a rotating basis. As time went on with a framework of discipline and love, modeled by how Jesus works with us, we saw more and more transformation. Meals were no longer taken in small cliques, but together in a huge circle. The women have even started to turn their sewing machines around to make a circle so that they can chat while they work.

Supporting Each Other as Image Bearers

We knew for sure that the caste barriers were breaking down when one of the women in the program named Aleena became ill. 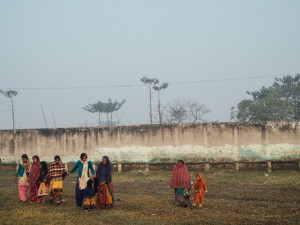 India is notorious for smog and dangerous air quality. In Bihar, many villagers burn trash for cooking and to keep warm, not knowing the health risks involved. Tuberculosis is a common illness that manifests in this environment. Aleena began showing symptoms and eventually she no longer had the strength to attend training. Being from the untouchable caste, Aleena and her husband could not afford to get her treated, and her health was rapidly declining. The women in our program took action using the skills they gained in training. As a part of our program, each woman is required to open a savings account and learn how to manage money. Through this initiative, the women pooled their savings to cover Aleena’s medical expenses. After visiting a private doctor, Aleena got the care she needed and was soon feeling much better. The doctor left her with instructions to preserve her health including staying away from the smoke, and a list of foods to avoid. . All the women teamed up to help her eat the right foods and to support her in the healing process.

Unity in the Imago Dei 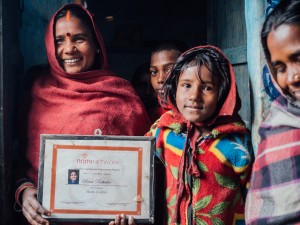 The power of community when barriers and discrimination are dissolved is stunning. When people go through shared experiences together, they begin to see each other through a common lens. The biggest challenge in Nomi Network’s quest to empower these women has been building their confidence and affirming their worth. We always begin our meetings with them the same way. We tell the women three things: “You are beautiful. You are talented. And we see potential in you.” As the trainees speak more positively about themselves and each other during each class, caste barriers begin to break and fall away. As these barriers fall away, the women are empowered to make choices, which gives them strength and freedom. The true cornerstone in fighting and eradicating human trafficking is teaching our women that they are not unworthy as humanity has deemed them to be, but a true reflection of an unbelievably loving and perfect God.

In honor of Mother’s Day, we honor our mothers and all of the amazing women in our network who exhibit the maternal face of God in our world and who work tirelessly in highly patriarchal cultural and religious contexts to dare to believe in their own equality and defy conventions to follow their own life call to do their part to lead, to mother, and to mend and heal the brokenness of our world. Shalom

Thank you to Justin J Wee at justindoesthings.com and David Goldman at davidgoldmanphoto.com for the photos.