As the new year begins, the near-universal feeling is eagerness to leave 2020 and its challenges far behind us. In many ways, change is indeed in the air. In the United States, a new federal government administration. Globally, hope for multiple vaccines to protect against COVID-19.

At the same time, many of the hardest parts of the past year simply cannot be left behind. The eyes of many have been unequivocally opened to the current realities of racial inequity and ideological divide. Vast economic disparities have further expanded. Sexual violence, child marriage, and domestic abuse have been exacerbated by lockdowns. To name just a few.

But from challenge, comes hope and opportunity, exemplified by this month’s blogger, Tabitha Mpamira, founder of EDJA.

So with Tabitha’s reminder that change must start within each of us as an inspiration, let’s not turn away from the past year without bringing along the lessons we’ve learned and the doors that have been opened to create hope and opportunities for meaningful, lasting change in the coming year and beyond. – Katinka Hakuta, Grants Manager

“Caring for myself is not self-indulgence, it is self-preservation,and that is an act of political warfare.” – Audre Lorde 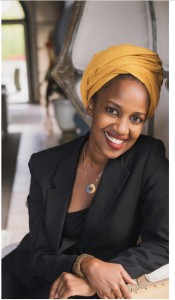 I can’t tell you how many times I’ve written and rewritten this piece. Why? Well, first, it’s pretty intimidating to follow Emily, Lisa, and the other great contributors to this platform. But even more daunting is attempting to capture the complexity and mixture of emotions evoked in all of us after all the human misery we experienced in 2020. And 2021 – not off to a great start! Already it feels like a trailer to the movie we’ve just seen. (“Can I please cancel my subscription?” friends are joking). So how does one choose just one area to lament, when each day another disruptive, dangerous, or shameful ism comes from our politicians, our communities, and the media – even from some of our own family members?

If you know anything about my work, you’d probably assume that I’d write about the “silent pandemic” – sexual and gender-based violence, that is – and normally you’d be right. That indeed has been my main cause. But after watching the Capitol of the most powerful country in the world invaded and desecrated by its own citizens, filled with unfounded hate and violent anger, and seeing the Leader of the Free World incite that behavior, I have to step back and wonder about the impact of all this trauma on our individual and collective psyches – as activists, who care about making this world better than we found it.

The one salient question I now hear most from friends and colleagues, whether it’s white friends who didn’t know how to support the black community during the Black Lives Matter protests, or male friends who want to stand up for women and the #MeToo movement; or from those appalled about the rise of sexual and domestic abuse of women and girls during lockdown; or from straight people wondering how they can fight alongside the LGBTQ community for equality, or help immigrant children in cages is: “Where do we begin?”

My simple answer for these difficult times is: Start within.

According to life coach and author Joi Lewis. “Tuning in ultimately keeps us from tuning out.” And as my mother used to say, when you point your finger at someone else, note that the rest of your fingers are pointing back at yourself. (I knew better than to talk back to my mom, but my kids have argued that the thumb should not be included in her statement.) Never mind, her point was this: We simply have to assume responsibility and our own accountability about whatever needs to be done before pointing at others. If we want more peace in our country, our homes, the world, we must start by cultivating peace within. If we are looking for more empathy and love around us, it has to begin with us. We want to end poverty? Start by sharing what we have. I think you get the point. Turning inward about our purpose, drive, intentions, needs and responsibilities creates the space and opportunities to then attend to the direction that finger was pointing. 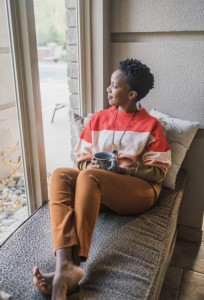 We’ve all heard flight attendants’ Oxygen Mask Rule: “Should the cabin lose pressure, oxygen masks will drop from the overhead area; place the mask over your nose and mouth before assisting others.” Although it may sound counterintuitive, there’s a reason that the rule now applies to those of us whose lives center around the call to fight social injustices. No one wins when we, ourselves, aren’t whole.

I spent the first part of my career putting masks on everyone else, from women rape survivors of the Rwandan genocide to suicidal patients at a mental health center in my home town of Lansing. But in 2015, it took young assault survivors in rural Uganda to show me that I was low on oxygen. First, a nine year-old told me her story of being raped, and attending class the next day as if nothing had happened because her family couldn’t afford the hospital fee, or pay police the $12 required to make an arrest. Then a grandmother brought me her five year-old who had been raped by her grandfather; she couldn’t afford the $5 that would have saved the child from AIDS. Wake-up call! I realized then that I had to mask-up if I were ever to make lasting change in that community. Although I had served as a mental health therapist dealing with trauma every day for six years, I had so intellectualized my work that I totally denied my own sexual assault as an 11 year-old. Finally forced to tune in, I realized that the survivor within me also needed an advocate. Therapy was my first step toward the establishment of EDJA, which recently merged with Nyaka for increased impact.

I have intentionally stayed away from the word “self-care” due to its hype and misuse, but radical self-care is the key to radical activism. Hurt people hurt others, but healed people heal others. There’s an intergenerational cycle of trauma in our world, yet most of us haven’t taken the time to understand the impact of inherited trauma. 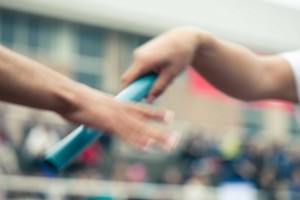 Picture a relay, where each runner hands a baton to the next. Each of us has been handed multiple batons, good and bad, from our parents, our cultures, our governments. (As the saying goes, it’s a rare fish that knows it’s wet.) Along with the healthy batons we inherit, we’re also born into racism, sexism, homophobia – batons handed to us whether we like them or not. So it’s up to each of us to decide which ones are keepers, and which we refuse pass on.

I’m convinced that our biggest challenge today is not the isms themselves but our inability to face them, understand them and heal the wounds that have been passed down. James Baldwin said it perfectly, “Nothing can be changed until it is faced.” Which batons are each of us holding that need to be dropped? They didn’t start with us but they can end with us. It’s what Gandhi meant when he said, “Be the change you wish to see in the world.”

Admin Imago Dei Fund2021-01-13T08:39:51-05:00
“Ego says: Once everything falls into place, I’ll feel peace. Spirit says: Find your peace, and then everything will fall into place.”
Marianne Williamson