Early in my philanthropic journey, I was privileged to have found my way to Women Moving Millions (WMM), a membership organization for people/organizations bringing a gender-lens to philanthropy. After two years of not meeting in person, WMM held its Annual Summit this past April and the conference theme—The Future of Democracy is Gender Equality—couldn’t have been more relevant and timely everywhere in our world as we have watched freedom slide backwards and authoritarian, patriarchal forces on the rise. Enjoy this blog post by the WMM CEO Sarah Haacke Byrd. – Emily Nielsen Jones, Founding Partner & Trustee

Let’s be bold in action.

That’s a wrap! What an incredible week of learning, inspiration, and transformation. Together with some of the leading experts and advocates working to advance gender and racial equality, we explored new ideas, perspectives, and solutions to realize gender equality.

This year’s Summit theme, The Future of Democracy is Gender Equality, was a call to attention to one of the greatest threats to gender equality; the weakening and unraveling of democracy. We cannot realize a gender equal world when democracy isn’t strong –and we can’t have strong democracies without equality. 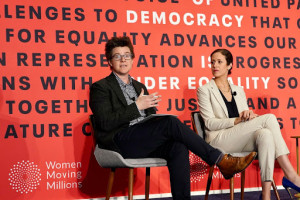 Now is the time to acknowledge that gender equality and democracy are linked and that wherever women’s rights are under threat and retreat, so too is democracy. Building stronger democracies will depend on our ability to unlock greater giving on critical issues affecting women’s rights.

It will require the bold action of philanthropy to ensure women’s rights are treated not as a parallel or complementary strategy but instead placed at the center of national and global approaches to build a more equitable democracy. Indeed, women’s rights and participation are integral to the very integrity of democracy. As USAID Administrator Samatha Power stated: “if you want peace in this world, trust women to deliver it.”

For fifteen years, Women Moving Millions has modeled the transformative potential of a community of women coming together to do just that – to leverage their combined expertise, influence, and resources to advance gender equality. What unites us is our shared vision of a gender equal world – a world that is just, at peace, and flourishing. What drives us is our belief that as long as less than 2% of philanthropic giving goes toward organizations advancing gender equality, that world will remain out of reach. 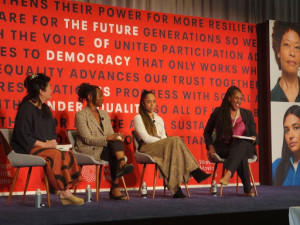 From climate solutions to designing more inclusive economies, ensuring greater representation in the culture sector, bolstering women’s reproductive health and rights, and restoring peace and security, women are architecting solutions to the most significant challenges confronting democracy. Meanwhile, philanthropy has more resources and tools than ever before. And communities like Women Moving Millions are positioned to lead the way.

So let’s be ambitious. Let’s be bold in action and harness our collective power as a force for change. The next chapter, written on democracy’s triumph, will be written by women.

“We cannot confront paternalistic, regressive assaults on gender equality and democracy without investing in women’s leadership, power, and influence. We must advocate for bold approaches to philanthropy and greater investment in our greatest agents of change: women.” – CEO @Sarah Haacke Byrd at #WMMSummit22. The Women Moving Millions community has bold plans for the future. #WMMSummit22