­
Loading...
ALL REFLECTIONS
Gratitude for 10 Years of Investing Together in the Mutuality & Doggedness of the Human Spirit
Emily Nielsen Jones | November 25, 2019

One thing about philanthropy that I struggle with is nailing the elevator speech. “Talkers talking their talk” as Walt Whitman put the quest to pin down complex, multifaceted realities into precise, airtight words. Indeed, we do a lot of talking in philanthropy. The work of social change is complex and philanthropy, as a sector, is particularly laden with contradictions, complexities, and paradoxes that can be hard to unravel.

When we founded the fund in 2009, my husband and I were philanthropic neophytes, unschooled in the craft and big ideas and prose of philanthropy. What got us started was almost too simple and unsophisticated to name: an interior nudge, I guess you might say a “call” of sorts, to grapple with what was ours to do in this world of increasingly concentrated economic privilege along side of great human need which we sensed was tearing our social fabric.

Ten years later, I look back and marvel at all of the incredible change agents I have met along the way and the multiplicity of ways that people frame and do the work of social change and philanthropy. Our primary way of languaging what we sought to do was the Christian notion of stewardship combined with a more pragmatic capitalist “return on investment” frame. We named the fund the Imago Dei Fund to capture our spiritual motivation and the sacred trust we all are endowed with as human beings to do our part to repair and mend the fractures that create so much harm and oppression in the world.

Whatever language you use, at the end of the day philanthropy is a means to an end of getting more money and resources circulating out into the world to invest in what Mauricio Miller, founder of the Family Independence Initiative, calls the “mutuality economy”—two words that might sound like an oxymoron placed side by side in one sentence. Let me not take up too much word count trying to untangle this but rather point you to Miller’s The Liberia Project — mutuality will grow the economy to unpack it for yourself but mostly let me just express my gratitude, on behalf of all of us at the Imago Dei Fund as we enter this Thanksgiving season and as we reflect back on both this past year and decade, for being a link in the many links that make up this more kind and reciprocal world that we all know is essential for basic human thriving and collective happiness and wellbeing.

Ok ok all that sounds nice, but what really does the Imago Dei Fund “do”? Ten years ago, we decided not to follow the advice to choose “one thing” to do/fund. Rather, we opted to engage more holistically and intentionally not put ourselves or our need to explain or measure the change we are funding in airtight terms. We got started without a clear road map or a fully-baked “theory of change” and gave ourselves permission to learn as we go and look for movements already happening in the world to get behind, partner with, and invest in. Ten years later, I can see how not needing to be, do, speak, and fund just one thing—though a bit murky—is essential to our DNA as a foundation and gives us a capacity to enter into the multifaceted and complex realities of our partners on the frontlines of change who do not have the luxury of doing just one thing.

In her wildly popular Ted Talk The Danger of a Single Story, novelist Chimamanda Adichie tells the story of how she found her authentic personal and cultural voice by not defining others or allowing herself to be defined by any one identity or story. “When we hear only a single story about another person or country, we risk a critical misunderstanding.” Individual people are complex. How much more so the problems we create? And even more so the solutions to these problems that human beings are inspired to create? Though a more nailable elevator speech, the downside of the single story—whether applied to a person, an organization, or people group or a cultural system—is that the whole gets reduced down to one of its parts or facets.

So ten years later, here I am still at times at a loss to distill down in a few snappy words what exactly we have been up to and what our place is in this world where the very philanthropy we are privileged to do is enabled by an economy that is a far cry from a mutuality economy with widening economic disparities which exacerbate vulnerabilities to the very social inhumanities our philanthropy is seeking to mitigate: modern-day slaveries which treat human beings like commodities to be transacted for profit and cheap labor, cold and heartless inhumanities all too often justified by culture and tradition, back-breaking and soul-numbing oppression, and eerily normalized sexual exploitation of vulnerable people, mostly children, women and migrants, which is all too often swept under the carpet as just the way things are.

What is our place in this world of abundance and plenty to go around yet where the economic structures of our world are making it less not more mutual?

Where stunning consolidations of wealth are the norm side-by-side needless want and heart-wrenching suffering?

And where freedom and democracy are in decline around the world? Indeed, the same widening economic disparities which nudged us to start the Imago Dei Fund in 2009 have worsened over the past ten years, creating socioeconomic conditions ripe for authoritarian “strong men” near and far preying on human vulnerability and longing for someone larger-than-life to “save” them. As we approach another election here in the US, lots of talkers talking their talk, but our words can feel like they are just bricks building that wall…

Though ever elusive and laden with traps, language is important. It gives the human spirit a voice to grapple with and make sense of all of the competing narratives that fill our brains. Language helps make the intangible more tangible. On a personal level, I have become a bit leary of both heavy “God talk” (particularly when it comes near the ballot box) and return-on-investment “scale” talk, both of which can be little too certain about how change happens and are prone to anointing “saviors” like those our world is increasingly electing.

As much as we may long for a savior to swoop down and rescue us from our world’s messes, we have nowhere to look but within. And at the person in front of us who is putting some skin in the game in the hard yet joy-inducing work of circulating their gifts, talents, and resources out into the world to repair and give life to the mutual economy that is the collective birthright of the human spirit. At the risk of veering into some lofty spiritual verbiage myself, at this moment in time, I am filled with gratitude and marvel at something a little more tangible/earthly than some of the heavy God talk that enters politics and a little more intangible/other-worldly than the return-on-investment talk that pervades philanthropy…

What is the inner nudge that turns ordinary mortals stuck in a seemingly immovable status quo into brave and enterprising change agents? Whatever language or constructs you tend to use to describe this—whether activism or spirituality or entrepreneurship or a little of all three—maybe the best thing to do is to not try to explain it too much or label it but to just close our eyes and marvel at it.

As I write this, a flood of names and beautiful faces and conversations cross my mind’s eye, too many to name, human beings on their way to doing something else, more conventional work to make a living or climb some ladder, but whose path was sideswiped by an overpowering call, a force from somewhere inside, to invest one’s life energy in repairing the ruptures and divides of our world and remake it into the more mutual world we know is more conducive to life and shared human flourishing. 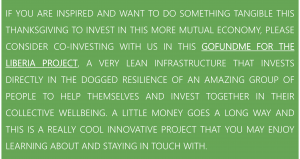 It is this collective doggedness of the human spirit (that simply cannot accept as normal things that should not be normal) that we have been investing in over the last ten years. The human spirit knows that we are the change we are waiting for. The human spirit thrives in mutuality and knows that we are each other’s keepers, and that we find happiness together when the unique gifts and assets we possess aren’t stockpiled but rather circulate out into the world as an “investment” in someone else’s happiness and wellbeing.

There are no saviors or quick fixes in this work. Changing and repairing deeply rooted social problems is part science, part art and involves navigating lots of things in motion and in tension. Most of all, change happens when we each walk our talk and when we stop doing both long enough to allow ourselves to be human and listen in for the mutuality and interdependence that animates all of life.

Thank you for your partnership this past year and over this past decade as we all seek to invest in the resiliency and collective mutuality of the human spirit to circulate whatever advantages we each possess in the service of the better world we all know is possible.

In the spirit of the season, pause for a quiet moment to simply marvel at and be grateful for the dogged resiliency and mutuality of the human spirit that lives inside of you and yearns for a better world.

Happy Thanksgiving from all of us at IDF!

Admin Imago Dei Fund2019-11-27T10:51:19-05:00
“We’ve been taught to think of courage as the courage to go out and kill the enemy. But spiritual courage is a much more deeply human courage. It’s the courage to stand up against injustice out of love.”
Dr. Riane Eisler