Groping to make sense of all of this vile groping that is filling our newsfeeds?

An invitation to join in on a special two-week series – God as Us – by the Center for Action and Contemplation (CAC) to offer words of healing and hope in the wake of this “Me Too” movement still unfolding before our eyes where story after story is coming out of grown men in respectable positions of trust, fame, and authority acting like sexual predators behind closed doors.  And even worse than the exploitative nature of the deeds themselves, getting away with it with a stunning impunity which makes one ask “What century are we living in? Have we not progressed further than this?” 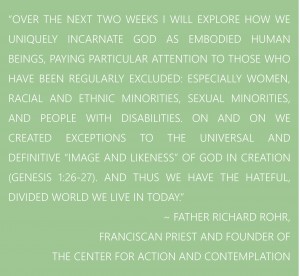 Led by Father Richard Rohr and Dr. James Finley, the CAC is a voice which seeks to reclaim the deeper contemplative wells of faith that have in large part been marginalzed by the more dogmatic side of mainstream religion to recover a more holistic way of living as spiritual human beings on our planet.

It is sort of low hanging fruit to say one is against the disturbing, exploitative behavior of these celebrity sexual predators. In this series, Rohr and his colleagues bravely go a step further to address the invisible theological and cultural layers that contribute to this disturbing pattern of normalized patriarchal presumption to power over another human being’s bodily and spiritual agency that in truth is as old as patriarchy itself—an ancient social system that arose some 4,000 years ago which came to see females as meant for ownership and submission very akin to slavery—and has stubbornly persisted beneath the surface of progress in the deeper layers of our collective, de facto social norms.

Each “me too” story is stunning in its heartbreaking, dehumanizing details—a grown man who has achieved great heights of success and respectability treating another human being, usually younger and more vulnerable, like a sexual object and then shaming them into silence and submission. As Wendo Aszed, desribes in her post Our Back to the Orchestra, the entitled, exploitative behavior that we see in all of these stories of an older man sexually imposing himself on a young girl or woman is all too normalized around the world where all too often girls lose their virginity to rape and just have to get up the next day and go to school.

The sexual impunity of all of these celebrity sexual predators is shocking yet in truth is a vestige of a deeply entrenched system of ancient patriarchal traditions and social norms which still live on in our world like out-dated “monuments”:  bride price, child marriage, polygamy, female genital cutting, the double standard of rigid female purity codes and male sexual latitude, and last but not least all those teachings of female submission and exclusion from shared leadership that still persist in our churches.

As Wendo so poetically challenged in her post, if we want to give the next generation a more mutual, healthier way of being human together, we need to more bravely challenge deeply rooted gender norms and “turn around” (aka “repent”) on many levels to play a different more beautiful tune. This series offered by the CAC is the perfect sheet of music to help in this task.

In this moment of conflicting movements of change which feel alot like the hurricanes that have been sweeping through our world, are you too sensing that there is something spiritual happening not only with this “me too” movement but also in the gender dynamics that have been stirred up by our recent election and current administration?

Do you believe that there is a spiritual current to the deeper societal transformation needed not just to stem all of this sexually predatory behavior which has been swept under the carpet for too long but also to more proactively create a world that is more gender-balanced and whole?

If so, take some time this week to read and contemplate this series God as Us – Me Too and ponder how even on the level of our faith traditions we need to “turn around”, as Wendo challenges, to play a better tune together as human beings.

Day Seven:  Summary of Week One

Day Eight:  Gates to the Temple

Adding a personal tone to the series, in this 10-minute reflection “Standing Against Sexual Harassment and the Abuse of Power” Dr. James Finley shares his own experiences of being abused by a monk when he was a child and offers words of hope and solidarity with those who are standing up to share their stories. He uses his own story to untangle the factors that cause so many to remain silent, as he did, in the face of the abuse of power of a respected “father figure”:

“What makes it so hard for the person to come out into the open?” Finley asks. “Why does it take so much courage? It takes so much courage one because the price they would pay… Here’s what’s bigger I think… If you come out into the open the society will side with the perpetrator… The reason they side with the perpetrator is complicated because the society does not want to question the “Father Figure”, the authority figure. [We] don’t want to look at the implications of that, that we are all poor weak human beings…”

Other than Roy Moore, most of the celebrity “father figures” who have been exposed for sexually predatory behavior over the past few weeks have not been religious per se, but the dynamics of demanding sexual submission and shaming of victims you read across these stories is eerily similar to the priest sexual abuse scandal in the Catholic church and to the more recent spade of smaller-yet-maybe-collectively-larger cases that have been brought to light in fundamentalist Protestant churches and ministries. As Kathryn Joyce asks in Silence of the Lambs, “Are Protestants concealing a Catholic-size sexual abuse scandal?” In this article, she recounts horrific details of well-loved pastors and “father figures” exhibiting sexually predatory and silencing behavior like Weinstein et al. “Silence and submission make fundamentalist Christians a ripe target,” Joyce describes. “Church people are easy to fool,” boasted one sexual predator in her story. Likewise, in Roy Moore and His Alleged Pursuit of an Under-aged Girl Is The Symptom of A Larger Problem in Evangelical Circles, Kathryn Brightbill describes a similar endemic problem with sexual abuse and silencing in the fundamentalist Christian context in which she was raised.

All the more powerful that this series is being convened by two “father figures” bravely calling Christians to examine and repent (“turn around”) from a patriarchal theological system which undermines healthy, mutually consenting human relationships.

Admin Imago Dei Fund2017-11-16T01:07:00-05:00
“Africans believe in something that is difficult to render in English. We call it ubuntu, botho. It means the essence of being human. You know when it is there and when it is absent. It speaks about humaneness, gentleness, hospitality, putting yourself out on behalf of others, being vulnerable. It embraces compassion and toughness. It recognizes that my humanity is bound up in yours, for we can only be human together.”
Desmond Tutu