In July 2021, IDF grantee partner Girl Rising launched the Future Rising Fellowship program. The project seeks to support young activists working at the intersection of environmental justice and gender equity. This is the story of Leticia Tituana, an indigenous woman from Ecuador who became one of the Fellowship’s first cohort. She is working to combine her training as a chemical engineer with the indigenous wisdom of her ancestors to address water contamination in her community.

I’ll begin by defining “warmi,” it means “woman” and it comes from Kichwa, one of Ecuador’s two official languages. It represents the harmony of the indigenous home, the union, strength, and rebellion.

Being born in a rural community and belonging to an Indigenous town allowed me to understand the needs of the most vulnerable sectors of the country, the challenges we confront as Indigenous women, and the environment that we must constantly adapt to. 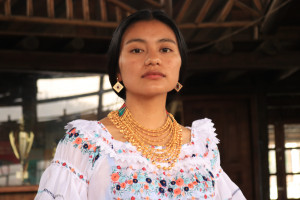 My name is Lisseth, but I feel that there’s always been confusion since everyone used to call me “María,” just like they called my mother, grandmother, neighbors, and all women who wore the anaco, the typical dress of the first nation communities they belonged to. I’ll never forget the smiles that each one of these women gave in response. It was a simple smile, warm, with eyes full of light, with the hope of being more than “María,” or that was my perception, that’s how I saw it and have wanted to change things ever since I started schooling at nine years old in the city. I wanted to be more than “María.”

I studied in four schools, one in my community, one in the parish, and two in the city. When I was nine years old and ready to start my sixth year of elementary school, the city schools refused to accept me because I came from an indigenous village, along with everything that implied. My education would have stopped there had it not been for the persistence of my mother, who carried the hope that I would have a better education.

My mother was a housewife and my father was a construction worker and learned about the importance of education from his contractors. Earning money to survive was a constant struggle for them. I saw this and sensed their frustration and so I spent hours in the school’s computer center to find my way – searching for a path forward. I wouldn’t have found it alone. My chemistry teacher, Jaime Albuja, was excellent. He told me not to waste my talent and dedication in a career that many others chose just because it seemed easy, and it was he who suggested that I pursue a career in STEM. Just over a month ago, I graduated with a degree in Chemical Engineering from Escuela Superior Politécnica del Litoral (ESPOL), one of the top public universities in Guayaquil, Ecuador.

It had always been in my plans to go far away, maybe I didn’t know my own place, but I longed for a change and thought about the challenges I faced. The main inconvenience from my point of view was money, how to pay the costs of rent, transport, food in a city. Luckily, I had seen all the Rocky movies on television and I knew from those stories, that I should not give up. However, something that I didn’t think about was that being an Indigenous woman, the first daughter from a home deeply tied to the customs and traditions of the Kichwa-Otavalo culture, might not allow me to go and study in another province.

My parents chose not to let me go, and my response to their refusal was that I didn’t care, that this time I would disobey them. I threatened to go and live under a bridge and not return without my degree. After some time, and a lot of soul searching, they finally accepted my decision, and I set off for Guayaquil, where I would study.

Once at University, I wondered if I had made the wrong choice. I was alone and I missed my family. We couldn’t speak because they didn’t have a cell phone or internet access, nor enough money to spend it on a call from a phone booth. At home every cent counted.

During my first days of classes, I didn’t realize that I was causing bewilderment in the university. I happily dressed in my typical dress, and that’s what I wore every day. A lot of my classmates asked me if the heat made me uncomfortable, but they were the only clothes I had. I felt proud to be dressed in so many colors stamped on my blouse and I wasn’t uncomfortable. My classmates never treated me badly, on the contrary, I made excellent friends who I still count on.

It was tough though to make ends meet and at one point, I was forced to leave school for lack of money. But I found my way back – working even harder than before at a lot of different jobs. I sold empanadas, cleaned houses, taught classes, sold crabs, lived in houses of families who helped me with a place to sleep and food. I helped with housework and saved for transportation costs.

Eventually I became an aide in the chemistry department, and that led to a scholarship to study abroad at the University of Malaga in Spain.

The happiness that I felt that year is still indescribable. I’m grateful to my professor, the support of my friends, the unconditional love of my parents, self-love, principles, goals, and motivation. For the first time I felt I was equal. I felt that the academy offered me the same rights, rights that I had been denied my entire life. I forgot about racial discrimination, I felt valued. 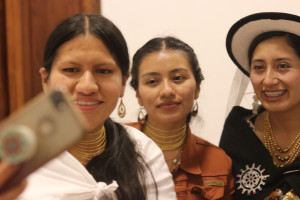 At the beginning of 2020, I became the only Ecuadorian woman, ever, to be awarded the CWSN Enrichment Fellowship for my project, which focused on the treatment of waters contaminated by agrochemicals in rural communities. That same year, I began a project that aimed to help other Indigenous girls from my community begin a STEM career. 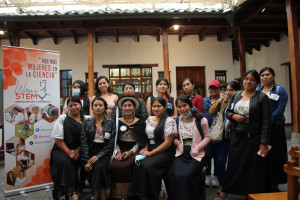 That’s how Warmi STEM formed, a group of Kichwa women for Kichwa women, and since its formation, Warmi STEM has formed partnerships with other national organizations with Kichwa women that have blossomed in an area little explored by the country’s first nation communities. We’ve also aligned ourselves with women who work in the aerospace industry, specifically NASA. Those who make up Warmi STEM live along the Ecuadorian Sierra, students and graduates of the best universities in the country and the world, which is something that allows the project to advance and have great reach. 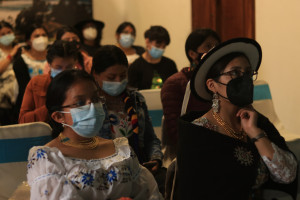 My commitment to my community is firm. I’m collaborating on the translation of the periodic table’s chemical elements from Spanish to Kichwa and on the translation of volcanic eruption alerts with the National Polytechnical School (EPN). I’m also part of the RunaSpace team, and we’ve participated in a NASA challenge. This team has a goal of involving First Nation communities in the space industry, knowing that for so many generations past, our ancestors have used science for agriculture, medicine and engineering in our communities. 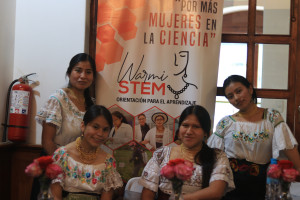 I still have challenges to confront, and I am working hard to involve Kichwa women in the industry. I don’t give up because I am a warmi in STEM. My Future Rising Fellowship is an exciting new addition to this work. It’s fantastic to be connected to an incredible group of environmental justice activists from all over the world.  They and their stories are an inspiration and I am working hard on telling the stories of women from my community who are working to bring about environmental justice.

If someone is reading this, I would like to tell them to trust their dreams and talents, work towards them and don’t give up. Value your teachers and take an interest in learning constantly. Be a leader and you will get there.

Admin Imago Dei Fund2021-10-18T13:40:17-05:00
“Some journeys are direct, and some are circuitous; some are heroic, and some are fearful and muddled. But every journey, honestly undertaken, stands a chance of taking us toward the place where our deep gladness meets the world’s deep need.”
Parker Palmer